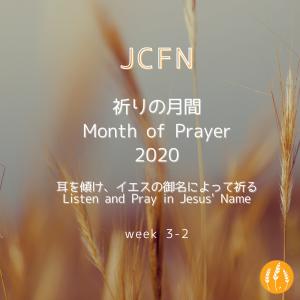 JXJ is an evangelistic meeting held on the fourth Saturday afternoon at the ISI House near Seattle University. It is a non-denominational ministry led primarily by Japanese students. Alumni, local Christians, and churches work together to provide food and serve as staff workers.

Many international students, including short-term international students who stay about a year, used to meet every month. However, the meeting has been cancelled since February due to the corona crisis. They started their activities using Zoom in April but many of the students who were involved in the ministry had to returned to Japan, and new students were not able to come to the U.S. They were praying for their future plans for the fall semester, and the leaders decided to return this ministry to God. Considering the fact that the student leaders had to leave from Seattle due to graduation and transfer, that they would not be able to meet in -person, and that we would not be able to bring new international students, it seemed like a natural progression.

However, in the midst of all this, a few new leaders stood up in September and decided to continue the work of JxJ through Online. We interviewed the current leaders to find out why they were led to do so. This time we interviewed Yoshiki Ohno.

Please tell us your name and where you are now and what you are doing.

My name is Yoshiki Ohno. I am currently working at an English conversation nursing facility in Kanagawa, but I also started serving as an evangelist at my mother church this October.

Could you briefly explain your involvement in JXJ?

After graduating from college, I worked in social work field for about four years and went to Seattle for about 13 months starting in August 2019 to study language. I attended JXJ for the first time in November 2019. I was involved with KGK in college, so I went to Seattle and found a ministry at the University of Washington called AAIV, a sister organization of IVCF, and when I went to that meeting, the staff there introduced me to JXJ.

So you went to KGK, which led to the IVCF and then to JXJ. Great! What was your first visit to JXJ?

I was happy with the Japanese language. I was immersed in English everyday (which is natural since I came to learn English), and I was at a local church on Sundays, so when I heard the word of God in Japanese at JXJ, I was very happy to hear it resonate directly to my heart without any language barrier.

I was also surprised to see so many young Christians in the United States. The participants were brightened, and I could tell that both Christian and non-Christian students were enjoying JXJ.

How did you become involved in JXJ’s leadership?

It all started when I played piano at JxJ. Before I knew it, I was on staff. LOL. All Christians were kinda staff members, so I wasn’t afraid to get involved.

The staff are all students, so it was easy to blend in and have fun. In addition to the staff, I received a lot of support from other senior Christians and was able to learn from many different people. After graduating from university in Japan, I was working, so it was fun to be involved in a ministry like KGK once again abroad.

What have you grown as staff?

It was a great experience to be able to invite friends from my school to JXJ. The large number of students at JXJ and the good food made it easier to invite them.

When I asked my friends who kept coming back why they kept coming to JXJ, they looked at our Christian students and said, “I want to enjoy living like you guys. I was happy to think that I was able to give off a little bit of the fragrance of Christ.

I’ve heard that JXJ may be coming to an end for once.

The reality was that the students, including myself, would all be gone, as they would be graduating or changing schools, returning to Japan or moving to other locations. Also, with no new students coming to Japan due to the corona (no one to minister to), it was very difficult to continue with no leaders and no one to minister to, which was a good reason to end the program once it was over.

Please tell us about how you decided to get involved in the decision to continue JXJ online.

I began to think again about what the role of JXJ should be.

It’s such an important ministry, so instead of finishing it, I wondered if I could do something about it…and then I realized that I could be involved in Japan, even if only while online.

When I was thinking about this, a senior member of JxJ who was my spiritual mentor asked me if I would like to do it in a way that I could. I was just thinking about it at the right time, so I thought it was from God.

What are your thoughts after a few months of online JXJ?

It’s very rewarding to have different people join us each time, and some of them are new to the event. I thought that only staff members might come, so I’m encouraged that more people have come than I expected.

What is your vision for the future of online JXJ?

I hope it will be a place of encouragement in everyone’s life and faith. Not only do I want to evangelize, but I also want to be a support to all Christians. Although the ministry is geared toward young people, we hope it will be inter-generational. We also hope to be some kind of connection between the churches in Seattle and Japan. We would like to have small group time to deepen our fellowship.

The result of accepting and responding to God’s calling is now online JXJ. The very story that I have become involved in is a testimony. I think when we respond to God in each situation in a flexible way, a way will be opened, a helping hand will be given, and we will be able to engage in the work we are being led to do.

Thank you very much. 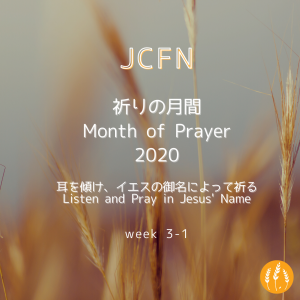