JXJ is an evangelistic meeting held on the fourth Saturday afternoon at the ISI House near Seattle University. It is a non-denominational ministry led primarily by Japanese students. Alumni, local Christians, and churches work together to provide food and serve as staff workers.

Many international students, including short-term international students who stay about a year, used to meet every month. However, the meeting has been cancelled since February due to the corona crisis. They started their activities using Zoom in April but many of the students who were involved in the ministry had to returned to Japan, and new students were not able to come to the U.S. They were praying for their future plans for the fall semester, and the leaders decided to return this ministry to God. Considering the fact that the student leaders had to leave from Seattle due to graduation and transfer, that they would not be able to meet in -person, and that we would not be able to bring new international students, it seemed like a natural progression.

However, in the midst of all this, a few new leaders stood up in September and decided to continue the work of JxJ through Online. We interviewed the current leaders to find out why they were led to do so. This time we interviewed Koichi Masuyama.

First, tell us where you are now and what you are doing.

How long have you been in Seattle? And how did you get involved in JXJ?

I went to college in Seattle from 2015 to October 2020; I became a Christian in Taiwan in 2014, just before I went to Seattle, and got baptized there. In 2018, my relationship with God became clearer and deeper. Around that time, I started going to a Japanese language church, and I was introduced to JXJ by that church and started going in June and have been going ever since.

What was your first impression of JXJ?

The program was led by a Japanese international student and had games, praise, and a testimony of faith so it was very familiar and casual and welcoming. I attended every time because it was a Saturday afternoon and there was plenty of time, fun, good food, and all the good things and no downsides.

How did you become a staff member?

As I participated in the monthly meetings, I gradually began to be asked to join the staff. Since it was only once a month, I thought it might be possible, so I decided to get involved.

What has been your experience as a staff member?

Being on the staff side, I learned about the responsibility that comes with being different from the participants (obviously). Also, being a staff member inevitably meant that I got to know other people, especially the members, much more deeply and fellowshipped with them. I think it gave me a desire to serve, to make sure that the non-Christians who come all the way out here can really enjoy themselves.

You mentioned that you were going to end JXJ because of COVID-19, but what was the background to your decision to continue?

At first, I gave up on the idea of continuing JXJ because I would be transferring to Oregon, and all the previous leaders would be gone at once when they returned home or graduated. But when we had the discussion and heard the thoughts on JXJ from those who have been involved with JXJ, I realized once again how important a ministry JXJ has been over the years.
I myself was grateful for the fellowship I had been given each time I participated in JXJ, and I really appreciated it.
So, during this period of time, I thought I could do it online, and I would be able to get involved from Oregon if I were online. Also, at the same time, Yoshiki expressed his intention to do it, and I thought we might be able to do it together, which encouraged me to make up my mind.

How do you feel about being a leader?

Actually, something happened.
Right now, JXJ is being promoted on Instagram and Facebook. I’m grateful for the people who contact me there, but I recently had an exchange with one person, an American, who was trying to join JXJ for a completely different purpose. If it were me, I would have just left it at that, because it would have been too much trouble, but because I am a leader and I have a responsibility, and because I know that I am not responding to this one person personally, but as a JXJ, I thought I needed to take the time to have a polite exchange with him. I did my best. It was hard … Sweat!

What vision do you have for online JXJ?

I like worship, but it’s hard to find people to lead since it’s online. But I think that because it’s online, we can train people in different places to help, which gives us a chance to get people involved in JXJ who aren’t necessarily directly involved in Seattle. We hope that by helping them, they will know about JXJ and pray for us, and we hope that we can use that opportunity to make a positive impact in their place.
Also, I think it’s a very volatile time for the participants, and I think there’s a lot of anxiety for them right now. I have fellow Christians with whom I can share and pray with about what I’m feeling insecure about. So I hope that participants will find those friends at JXJ, and that JXJ will be that place. I want it to be a place where people can step away from the anxiety and become a time of fun, a space of relaxation, a place of encouragement and fulfillment. I hope that we can be a community that you are happy to come to today.
To that end, we want to provide a safe space where we can have deep conversations. I want to make sure that we have time for small groups that are motivating and where we can share our weaknesses.

May JXJ Online be blessed! 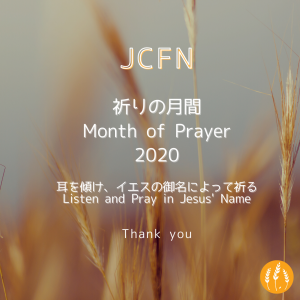